Not many people end up spending the rest of their lives with the first person they dated. So pretty much everyone has to go through the hassle of breaking up at least once. How do you minimise the pain while breaking up?

Ways to leave your lover
At the beginning of courtship, relationships can evaporate while they were only just starting to take shape. If the lack of serious interest was mutual, it can hardly be counted as a relationship, as it was more like a one-night stand that was tested for long-term potential but failed to launch. If only one of the two gave up, then the guy who was dumped may feel cheated out of a chance to prove himself. Especially if calls suddenly aren’t returned anymore without a reason, it can lead to self-doubt and frustration.

A long-term relationship may cool down long before either of the people involved is aware of it. People drift apart over the years and suddenly realize it’s too late to reverse that process. Interests have changed, communication flounders, the sex life rolled over and died and now you have a roommate who is not fulfilling your physical or romantic needs anymore. The ‘living with my brother’ scenario happens to a lot of couples. It is avoidable, up to a point, by continually trying to find ways to be romantic together and keep the sex interesting. But sometimes there is no other option than to admit defeat. When it just feels like a chore, and any spark has fizzled, it may be time to quit. The feeling can be mutual, but if one person is not willing to admit that this has happened, or if it only feels like that to one of the partners, it will be painful to tell the other person that the relationship is over.

There may be differing standards within the relationship. Some guys are okay with a lack of romance and sex for the sake of companionship and stability, while others would rather be alone than live without passion. Since no one is really at fault if needs and feelings change over the years, it’s pointless to blame each other if things go south. That can certainly be frustrating since feelings of sadness and anger will be flowing through your body and mind without a proper outlet. If the decision to break up wasn’t made together, then the one who was ‘dumped’ may still get angry and try to hurt the guy he loved for so long. This can be therapeutic up to a certain degree, as it helps vents emotions and creates a clear endpoint. But both partners need to realize that they have shared a lot of love and that they may still be able to share more after a cooldown period, even if they then interact not as a couple but as friends. 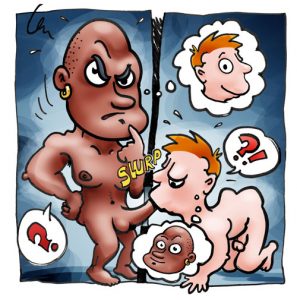 While some relationships fade away slowly, others do not go quietly into that good night. They explode suddenly into major drama. There may be screaming and rending of clothes and pulling of wigs. This tends to happen in situations where one specific incident, like cheating, is the cause for ending the relationship. Often each partner blames the other, even when the blame should be shared at least a little bit. If a couple caught each other in the act on opposing sides of the same glory hole (a hole in a thin wall through which you can hang your dick to get sucked off anonymously) while supposedly being monogamous, they may still try to justify their own actions and condemn their boyfriend’s.

The good thing about a passionate row is that there’s passion. When there are still strong, mutual feelings, it may be possible to salvage the relationship, if these can be turned into something positive instead. The danger is that people can channel all of that energy into hurting the other person for not loving them the way they wanted, drawing out a break-up to maximize the potential for inflicting pain, even if it makes them suffer as well. A little bit of drama can be healthy and give closure, too much of it can turn toxic and leave both sides unnecessarily bitter.

“The hottest love has the coldest end.”
– Socrates, philosopher

What to do?
Even if you are having an amicable break-up, it can be good to let your ex know how you feel and what your perspective on the situation is. It is best to not be too accusatory, focus on your emotions (“I feel…”) as opposed to what he did to you. If you are the one who is making the break, try to give the other person a reason, even if it is hard to put into words. If you are being dumped, make him give you that reason. It will help you gain some perspective and will keep you from wasting time, wondering what went wrong. However, it may take a few days or even weeks before one of you is able to give a clearly verbalized reason, so be patient. A bit of distance may be needed for a clearer view.

Getting pointlessly nasty with your ex may be cool for a giggle with your friends, but as long as you are focussing on him, you are not letting him go and are keeping yourself from moving on. Also, don’t forget that the gay scene tends to be small and that most acquaintances likely travel within even smaller circles within that scene. If you go completely crazy and irrational, word will travel through mutual friends and mud will end up getting flung back and forth. If at all possible, try to keep some mutual respect.

After blowing off steam, go cold-turkey. Even if you are one of those couples already mostly indifferent to each other, you will want to disentangle as soon as possible. Stand on your own two feet for a while and rediscover who you are when living solo. If you were living together, discuss who will be moving out and arrange it as soon as possible. Living with your ex will hold you back. You need to let your thoughts and emotions about him rage, change and fade. Be mature about dividing your possessions and don’t sweat the small stuff. If you paid for the refrigerator by yourself, it should be yours, but don’t start fighting about a Lady GaGa cd and other things that can be replaced easily.

After you have achieved some distance, figure out if you could be friends with your ex at some point, if there is enough to build on. The ‘becoming friends’ part is completely optional and not advisable if you are still secretly carrying a torch for your ex or if you still resent him a bit. Being ‘just friends’ will require getting to know him in a different way, as your connection to him won’t be the same. But especially after a relationship that lasted for years, your ex is someone who knows you very well and who shared a lot with you. Potentially, it could be a deep and gratifying friendship and the bond you keep would also make the years you invested in the relationship feel like less of a waste.

Be forewarned, however, that coupling up with an ex can be confusing. He may have changed for the better during the time you were apart, but don’t be surprised if he returns to his old ways fairly quickly if he gets back together with you. Often two people in combination play specific roles that are hard to change once they are set. You may be able to find a different way to deal with your roles the second time around, though, because you have a fresh perspective on them and have seen each other from a new angle, outside of a relationship.

Love after love
Following a break-up, you may feel lonely, confused, angry or sad. There is really no way to avoid these feelings, and the longer the relationship and the deeper your investment, the longer it will take for those feelings to fade. Often you will need a third to half the amount of time you were involved with someone to really get over the loss. Not everyone deals with loss in the same way. Some people lock themselves into their house for a while to confront their sadness one-on-one, others keep busy and distract themselves to keep from wallowing in self-pity. In either case, don’t pretend your feelings don’t exist. Ignoring them will not make them go away. You need to make peace with them and feel okay with yourself again before the next guy comes along and tries to win your heart. Eventually, you will start to feel better and be ready to go out there and find the Love of your Life again. For real this time.

Some people get involved with a new guy while still grieving for their last relationship. This is also known as ‘rebounding’. Basically, you’re using someone else to try to get over your ex, while not really ready for commitment. This is a far from ideal situation for your new boyfriend, so the responsible thing to do is to warn him about your emotional baggage. He can then decide for himself if he is willing to be at extra risk for heartbreak. If he does go for it, you should probably take it very slowly and make sure you don’t sabotage the affair by acting out your remaining frustrations on the blameless newcomer. Unfortunately, there is no clear finish to the emotional processing of a now-defunct relationship and even when you think it’s all over and done with, it may work itself into your new relationship in subtle ways. When you hit a rough spot, take care not to compare the new relationship negatively to a previous and possibly somewhat idealized one.

“I only have two exes I am still friends with. Someone you matched with for a relationship – if only for a while – is not always a match as a friend. When the love has died and any negativity has been aired, there’s not always enough residual interest to build a friendship together.”
– Terry

Sex-exes
Finally, some advice for dealing with people you slept with, but weren’t actually involved with for whatever reason. You may find yourself accumulating a number of those over the years. Don’t be surprised if these people end up having unexpected connections to you, past or present, and pop back into your life. They may end up being your best friend’s boyfriend or your new colleague at work. The gay world can be scarily small. So treat these sex-exes kindly and say ‘hello’ in passing if you don’t see a jealous boyfriend around. Don’t just do this because it is polite to be civil with someone you had between your legs at some point, but also because you may want to revisit them someday when you are horny.