There is nothing new or revolutionary about group sex. The Romans enjoyed this bit of hedonism, and the phenomenon still exists many centuries later. There is something nice and decadent about having a whole buffet of men on display and ready to pick from. Only instead of calories, watch out for STDs.

Finding the butt buffet
There are several ways to land yourself in a surplus of naked men. You have free reign in places meant for cruising. Porn theatres, for example, can feature a very interactive audience, and all sorts of things go on at gay sauna’s as well. There is plenty to touch in the shadows of darkrooms, as you pass men with brooding looks and sex on the brain. Barely being able to see your partner in these places is sometimes a minus, sometimes a plus. If you like as much anonymity as you can get, some clubs feature gloryholes. These are holes in a wall at crotch level. You stick your dick through so that someone, unseen, on the other side (with hopefully good intentions) has access to it. Generally you will pick one person from the buffet and go at it 1-on-1. Group sex does occur at the kind of places mentioned, but large pile-ups are rare.

Depending on where you live, there may be a club in your area that has weekly or monthly sex parties. If you are curious about group sex, these are good places to have a first look, as you won’t necessarily be expected to join in the action and can observe and relax a little. If the parties are legal under local laws, they are likely to be advertised online, in magazines and through flyers in select gay bars. Otherwise you may have to find out through word of mouth. A web search it always worth a shot. Be sure to check the dress code beforehand and the theme of the evening, if there is one. The official policy of public sex parties is likely to be: no drugs and safer sex only. The reality will remain to be seen once you’ve arrived. You may have to strip naked at the door, but sometimes underwear is allowed, and certain gatherings require a specific kind of fetish gear. Dress for the occasion.

Another way to end up at an orgy is to be invited to one through a friend or an online contact. These are likely smaller affairs at someone’s home, and participation is by invitation only. The smaller number of men makes it more important that nearly everybody there is your type. If you don’t know anybody at the party and were recruited online, it is advisable to meet with one of the hosts beforehand to ask some questions about the party and maybe to have some fun together in advance. Important points to discuss are policies about drugs, safer sex and any kind of special interest the group has, such as feet, nipples, body hair, leather, S&M, etcetera. Ask if there will be the opportunity to shower and clean up. Also ask what kind of men are being invited and try to get some pictures or profiles if discretion is not too much of an issue. Once you are at a party like this, you will be expected to join in. Voyeurs will likely not be welcome unless it has been stated explicitly that just watching is okay. And at gatherings like this, you will have to be extra considerate. Avoid leaving stains and clean up your condoms. This will increase the odds of being asked back.

“I believe in quality in great quantity.”
– David

Before playtime
When screwing around with a group of men, expect to be exposed to a variety of bugs. Protecting yourself from HIV should be relatively easy as long as you stay clearheaded and keep come out of your mouth and butt, avoid getting a sticky finger in there, and consistently and properly use a condom for fucking. You should use a new condom for every guy, with lots of lube. Alternatively (or on top of this) you could use PrEP to keep HIV out. Syphilis, hepatitis, herpes, gonorrhea, genital warts and chlamydia will be harder to dodge. Using a condom will lower the odds that you catch something, but doesn’t fully take away the risk. With all the bodily fluids being exchanged, the party is not just a merry-go-round of fun for you, but also for bugs, viruses and bacteria. Be aware of this risk, accept it consciously and get yourself checked out regularly, about every six months or so, to make sure you are not carrying around mementos from all the fun you’ve had.

Also keep in mind that most men take less accountability for what they do during anonymous sex, so take charge in keeping yourself safe. Don’t let alcohol or drugs take over to the point that you don’t know what you are doing. If you end up itching or oozing, you will likely not be able to track down the person who shared this with you, as you had sex with various men simultaneously. People who regularly have sex with a lot of people, who in turn also regularly have sex with a lot of people, logically are more likely to have and pass on STDs.

“Sex parties are a bit too messy and complicated for me. You could retreat into a corner, of course, with two or three guys, but then you might as well have met up at somebody’s house, which would have been more comfortable. Cheaper too.”
– Robert

There are orgies where the action takes place in one large central pile. However, in most cases you will end up experiencing a series of twosomes and threesomes over the course of one evening. You may feel like a kid at a candy store in the beginning, but don’t get too frustrated if you can’t have sex with all the men you like. It will be more satisfying to have relaxed, extended sex with a few of the hotter guys than to rush around, trying to get a piece of everybody. Enjoy the experiences you’re having, don’t focus on what you’re missing out on. 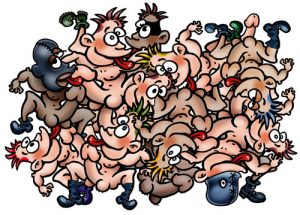 When you see two or multiple people at play together, check if you are welcome to join. Exchange a look with them and maybe put a friendly hand on one or two of the guys. If the response you get is only lukewarm, back off and don’t spoil their fun. A new opportunity for hot sex will be coming up soon enough. Don’t expect the group action to have a clear ending, as people may wander off or join your group at any point. Some people will have an orgasm several times, others once or not at all, the climax not being the main goal.

Don’t get bitchy if you are approached or felt up by someone who isn’t attractive to you. Give them a quick smile, while clearly shaking your head. If that doesn’t get his hands off you, gently take hold of his hands and push them away. If he still persists after that, feel free to be verbal about it: “Sorry, I’m not interested.”

If you have friends who visit sex parties and are open about it, ask them about their experiences and maybe they can recommend nice, clean places close by where you can find guys to your liking. Keep in mind, however, that these same friends could come wandering by during a party, while you are in an embarrassing position. Running into people you know but never expected to see naked and ‘in the act’ can be funny or awkward or both. The next time you see them after such an occasion, try to look them in the eye without blushing. Shared discretion should hopefully keep you both quiet about the decadent, sexy fun you had. But since not everyone feels bashful about enjoying group sex, your adventures may at some point end up circulating as gossip.